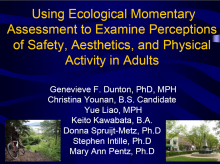 Background
Research suggests that participation in physical activity may vary based on perceptions of neighborhood safety and aesthetics. Individuals who live in neighborhoods perceived as safe, having ample vegetation, and free from litter have reported engaging in more physical activity. What needs to be addressed, however, is whether adults actually perform physical activity in settings that are safe and aesthetically pleasing. The majority of existing data involves use of paper-and-pencil questionnaires, which risk recall and other biases. The current study seeks to eliminate or decrease the incidence of biases by implementing Ecological Momentary Assessment (EMA). By capturing responses in real time, data retrieved will provide a more accurate account of these measures.

Objectives
This study seeks to examine relationships between perceptions of safety, aesthetics, and physical activity. Data was retrieved using EMA surveys that were administered to residents of the Inland Empire in California.

Methods
EMA surveys were administered over four consecutive days (Saturday to Tuesday) at random times within two-hour intervals. Each participant was provided with an HTC Shadow mobile telephone (T-Mobile USA, Inc.). Participants were prompted to disclose information about their immediate setting and behaviors including physical location (e.g. home indoors, home outdoors, outdoors not at home); main activity (e.g. reading, watching TV, physical activity/exercising); perceptions of safety (4-point response scale ranging from “very unsafe” to “very safe”); and perceptions of vegetation, shade from the sun, garbage and litter, and traffic (4-point response scales ranging from “none” to “a lot”). Chi-square analyses determined whether the likelihood of being physically active (versus inactive) was related to physical setting (indoors or outdoors). Independent sample t-tests examined whether perceptions of vegetation, shade, litter and garbage, and traffic differed by activity status (active vs. inactive).

Results
Data collection consisted of 74 participants (age range of 20 to 73 years) (83.3% female, 16.7% male) (45.8% White, 26.4% Asian, 6.9% Black or African American, 6.9% Multi-race, 4.2% American Indian or Alaska Native). Results suggested that there was statistically significant relationship between physical location (indoors or outdoors) and main activity (physically active or sedentary) (p<.001). Over half (56%) of all physical activity/exercise reported occurred outdoors, whereas less than a fraction (5.6%) of inactive behaviors (e.g., reading, eating, etc.) were reported outdoors. The mean score for perceptions of vegetation was found to be significantly higher when individuals were engaging in physical activity/exercise (M=2.96, SD = 1.21) as compared with inactive behaviors (M=2.42, SD = 1.08) performed outdoors (p=.036). Also, perceptions of safety were marginally higher when individuals were engaging in physical activity (M = 3.80, SD =0.41) and exercise as opposed to inactive (M = 3.64, SD = 0.55) outdoor behaviors (p = .110). There was no evidence to suggest that perceived levels of litter and garbage in the environment, traffic and shade from the sun were associated with physical activity in those locations.

Conclusions
Use of EMA for the current study provides informative data to help draw conclusions about the associations between the environment, perceptions of safety and aesthetics, and physical activity. To better understand where people are being physically active, this study indicates that the majority of people who report being physically active also report being outdoors. In addition, adults were more likely to engage in physical activity in locations perceived to have more vegetation. A trend was also observed suggesting that participants were more likely to engage in settings that they perceived to be safer. In contrast, perceptions of litter and garbage, shade, and traffic had little impact on the physical activity levels taking place in those settings. These results encourage further research using EMA to investigate the effects of other types of perceived environmental characteristics on physical activity. This type of information will help to better understand how environmental features influence physical activity.