Zoning for a Healthy Baltimore: A Health Impact Assessment to of the Transform Baltimore Comprehensive Zoning Code Rewrite

Zoning for a Healthy Baltimore: A Health Impact Assessment to of the Transform Baltimore Comprehensive Zoning Code Rewrite 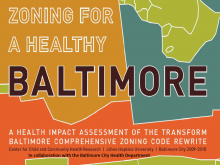 Background:
Developing innovative policy approaches to address health issues in Baltimore City is essential. Baltimore residents have shorter life expectancy than other Marylanders and experience excess mortality due to cardiovascular disease and violence, among other outcomes. It is likely that neighborhood factors contribute to health disparities experienced by Baltimore residents in general, and residents from socioeconomically disadvantaged communities in particular. Crime rates are elevated throughout the city compared to the rest of the state but are particularly high in disadvantaged areas that also lack access to healthy food options and have higher concentrations of potentially unhealthy commercial establishments such as corner stores and off-premise alcohol sales outlets. Zoning is one policy avenue that contributes to shaping the built environment. Baltimore is currently in the process of a comprehensive rewrite of the City’s zoning code for the first time since 1971. While zoning policies cannot determine whether development occurs in disadvantaged areas, it can regulate how development occurs, which could have long-term implications for neighborhood around the city. We conducted a Health Impact Assessment of Baltimore City’s comprehensive zoning code rewrite in order to provide evidence-based recommendations for increasing the health promoting potential of the City’s new zoning code.

Objectives:
1) Perform a literature review and quantitative assessment of the potential for Baltimore’s proposed new zoning code (the draft code) to create healthier communities and decrease health disparities with an emphasis on promoting physical activity, increasing access to healthy foods, and preventing obesity and crime. 2) Provide recommendations regarding revisions to the draft code in order to maximize its potential to improve population health in Baltimore City and mitigate the potential for unanticipated negative health consequences.

Methods:
We conducted a mixed methods analysis to evaluate the potential for the draft code to affect physical activity, healthy eating, violent crime, obesity and related illnesses, and pedestrian injuries. We first conducted a review of the literature and an in depth-analysis comparing the current code and the draft code with special attention to how changes to the zoning code might affect health-related built environment features. Quantitative estimation of potential impacts of the draft code on the built environment of high and low poverty neighborhoods were generated after identification of elements of the draft code that represented significant changes in the types of private land development allowed in City neighborhoods. The built environment features of focus for the impact assessment were derived from the results of interviews, meeting observations, and a systematic literature review. Recommendations for how to improve the draft code were developed based on the literature review, comparison of the current code and the draft code, impact assessment and expert opinions.

Conclusions:
While a variety of other policy avenues apart from zoning have important implications for population health, this HIA represents a unique opportunity to evaluate the potential health effects of a comprehensive municipal zoning code rewrite in a way that has not occurred previously in the U.S. Insuring that population health is considered in this process is likely to increase the potential for the new zoning code ordinance to contribute to the development of healthy communities throughout Baltimore.

Support:
This research was supported by a Rapid Response grant from the Robert Wood Johnson Foundation Active Living Research (Grant No. 66853).