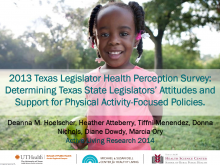 Background and Purpose
During the past 15 years, the Texas State Legislature has passed several progressive policies related to physical activity.  These policies have predominantly focused on requirements for coordinated school health programs, for oversight of physical activity and nutrition school policies by School Health Advisory Councils (SHACs), and for requirements for Fitnessgram testing. These policies have been supported by the Partnership for a Healthy Texas (the ‘Partnership’), a coalition composed of stakeholders focused on obesity prevention through policy change; the Partnership has made significant and incremental gains in obesity prevention-related legislation since 2001.  Evaluation of the physical activity policies implemented in Texas has shown significant changes in school environments and physical activity among public school children.

The recent turnover in the Texas Legislature because of the 2012 election has resulted in over 50% of Texas State Legislators (181 in total) being new or junior members.  Thus, many of the new legislative members and their staff have limited knowledge of previous legislative history, educational activities, and obesity issues in Texas.  This situation has created a challenge for the successful dissemination of research findings and potential for continued impact on policy actions.  Information is needed on current legislative knowledge and resources related to childhood obesity so our policy-focused partners can develop both effective communications and strategic dissemination efforts for childhood obesity-related legislation.

Description
The primary focus of this project funded in November 2012 was to assess the knowledge, attitudes, and perceptions about obesity prevention and control measures of legislators from the 83rd Texas legislative session.  The purpose of this presentation is to present results for physical activity and related environmental changes.

This mixed-methods study included a cross-sectional quantitative survey conducted among the Texas legislature, together with qualitative interviews with a subset of legislators.  Survey questions were drawn from previously used legislative surveys and adapted specifically for the Texas environment and policy targets.  Investigators collaborated with an Advisory Board consisting of members of the Partnership, as well as other stakeholders, such as the Texas Medical Association and University governmental liaisons, to identify appropriate survey topics and legislative language/wording to develop the survey.  A complete legislator listing, including both descriptive and contact information, was compiled prior to the start of the session in January, 2013; a total of 181 legislators were identified from both the House and the Senate.  Letters of introduction and copies of the survey were distributed to all legislators, along with a link to an online survey during March, 2013.  Surveys were administered by hardcopy, online or by interview, as most convenient for the legislator/staff person.

Data collection continued through the end of the third special session (August 2013).  Quantitative survey data are compiled and presented in aggregate.  Interview data were reviewed for common themes, and were triangulated with survey quantitative results.

Lessons Learned
Through the end of August, a total of 81 surveys were collected (45% response rate), with an approximately equal split between Republicans and Democrats (n = 40 and 39, respectively), and 68 House and 11 Senate members/staff; in addition, 16 interviews were completed (n = 9 House and 7 senate members/staff).  Preliminary results indicate policy recommendations with strong legislator support included improving nutrition and physical activity in early childhood programs, enhancing community environments to promote physical activity, providing more physical activity in schools, and supporting coordinated school health programs that increase physical activity and nutrition education.  Policy recommendations with little support generally included limiting sales of foods.  Legislators generally believed that the groups with the biggest role in righting obesity in Texas were individuals, parents & families, and healthcare providers; transportation groups were mentioned as the least likely to have a role in fighting obesity.  Funding and personal responsibility were listed as the biggest obstacles for passing obesity prevention-related legislation.  Most Texas legislators and their staff cited the use of online resources as a primary source of information (e.g., websites, Google).

Conclusions and Implications
In general, Texas legislators support physical activity-related policies; however, some key sectors that influence physical activity (e.g., transportation groups) are not seen as playing a key role in obesity prevention.

Next Steps
Communications to address physical activity policies should be framed to address funding and individual-level concerns. In particular, more efforts should be devoted to educating legislators about the role of transportation resources and policies in increasing physical activity. Resources for legislative action need to be available on the Internet, and search terms for websites and other resources should be optimized to allow for easy access.