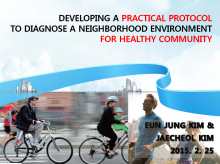 Background
Physical inactivity is one of major preventable health risks among the Korean population. According to the latest statistics, more than 60% of Korean adults do not engage in the recommended amount of walking, and it appears as if this percentage is increasing.  The rates of many public health challenges such as obesity, type 2 diabetes, cardiovascular and respiratory diseases, and depression have grown rapidly during the past decade. To cope with such challenges, both public health scientists and urban planners have been investigating the relationship between the built environment and health and devoted a great deal of effort to understanding the link between health and planning. However, until now, researchers have focused mainly on verifying and demonstrating the relationship between the built environment and health (including physical activities), not on determining ways to promote healthy communities in real-world contexts. In addition, few related policies have been implemented in Korea. The situations are the same in other countries, including the U.S. The purpose of this study was to develop and examine a systematic process (or protocol) for promoting healthy communities that encourage active, safe, pleasant, and socially-supportive living.  Local governments will be able to use the proposed protocol to locate the most problematic areas in their neighborhoods, identify the latent factors influencing them, and finally develop strategies for improving the environmental quality of such places.

Description
In this study, the authors designed a standardized protocol for diagnosing problem areas and prescribing strategies for mitigating the problems in a neighborhood environment and conducted a case study using the designed protocol. The protocol included instructions for collecting and analyzing data using three different research techniques:  map and archival data analysis, a site investigation, and user (or resident) surveys.  Following a detailed process that identified vulnerable places and major factors influencing environmental quality, the authors conducted a “triangulation” of the results of the analyses. Through the map and archival data analysis, this study examined the overall context of a neighborhood and arranged field investigations and collected resident surveys. Then, trained observers conducted field investigations to collect detailed and objective information about the physical environment and user behaviors.  Finally, user surveys provided data pertaining to residents’ subjective and integrative perception of the environmental quality of their neighborhood.  In particular, respondents provided spatial data by marking problematic places on a map.  To test its usability and improve the protocol, the authors conducted a case study, testing the designed protocol in a neighborhood of the City of Anyang, a local municipality located in the Seoul metropolitan area.

Lessons Learned
The results of the case study showed that the protocol as useful for identifying problematic areas in the neighborhood and the challenges that must be tackled to improve them. For instance, vulnerable places indicated by the three different methodological approaches generally coincided and particularly, detailed data collected from field investigations and surveys provided background information for identifying latent influencing factors. For example, the most problematic place was a narrow alley behind large commercial buildings. In particular, narrow and uneven pedestrian paths, frequent, dangerous contact between pedestrian and vehicle traffic, confusing signage, and stench from uncollected waste made the place unpleasant and inadequate for pedestrians, particularly for the disabled and elderly.

Conclusions
This study has important policy implications that differ from those of previous studies, particularly on the scale of a neighborhood, where citizens’ everyday lives occur.  For instance, the procedural process that this study proposed can be a useful tool with which each local municipality and its citizens can develop context-sensitive solutions for their own neighborhoods.

Next Steps
As an early prototype, the protocol still requires two improvements before it can work on a widespread basis.  First, the content and processes of the protocol currently create an undue burden on lay persons. For its widespread use, the protocol should be simpler and more concise. Second, the case study neighborhood consisted mainly of an urban, adult population. Therefore, future studies should test the protocol in diverse environmental settings that contain child, senior, and disabled populations.