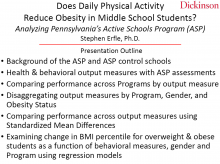 Background
Pennsylvania Department of Health (PADoH) launched the Active Schools Program (ASP) to encourage daily physical activity in middle schools across the Commonwealth. ASP schools agreed to institute a minimum of thirty minutes of daily moderate to vigorous physical activity and administer a physical fitness assessment in PE classes at the beginning and the end of the 2009-2010 school year. Control schools undertook the ASP fitness assessments at the start and the end of the 2010-2011 school year, but otherwise maintained their standard physical activity schedule.

Objectives
Do students at schools with daily physical activity incorporated into the school day have significantly better outcomes than students at schools without daily physical activity? The ASP data allows examination of performance at both the midstream Behaviors level and at the downstream Health outcomes level. The ASP behavioral outcome measures include changes in curl-ups, push-ups and the mile run (denoted dC, dP, and dM). Health outcome measures include change in BMI (dB) and change in BMI percentile (dB%) which adjusts for differences in age and gender.

Methods
Thirty ASP schools provided complete start of year and end of year assessments (N = 6,693). Schools participating in the ASP were allowed to purchase commercial programs from a list provided by PADoH or they were allowed to propose their own program. This led to five ASP subsamples. Three subsamples are for programs chosen by multiple ASP schools, which included Hopsport (S = 9, N = 2,066), Spark (S = 7, N = 1,069), and Catch (S = 2, N = 601). A fourth, Other, aggregates together schools which chose Polar, Project Fit America, Healthy PE, and Physical Best (S = 4, N = 405). Finally, Own, includes schools that used the ASP funds to create their own program by purchasing fitness equipment or creating an outdoor fitness course or a walking trail (S = 8, N = 2,552). Nine control schools provided complete start of year and end of year assessments (N = 3,513). The analysis employs difference between means tests and regression analysis to examine significant differences between control schools and ASP schools as well as subsamples of the ASP schools as noted above. Effect size across the five outcome measures are compared using standard mean differences (SMD).

Results
The Active Schools Program (ASP) was successful in altering obesity outcomes in middle school students at ASP schools relative to students at a group of control schools. In terms of overall outcome effect, the most successful individual programs studied were Hopsport and Spark, as measured by standardized mean differences. Catch and Other programs had more ambiguous overall effects. The schools that created their own program exhibited a significantly worse dB% effect but they did better on all three behavioral outcomes than control schools. In general, health outcome SMDs were more modest than behavioral outcomes but significant behavioral outcomes were present, especially for Hopsport and Spark. The male/female SMD comparisons suggest that, in general, females had a relatively higher treatment effect than males on health outcomes and males had a relatively higher treatment effect than females on behavioral outcomes at schools where formal programs were chosen. These effects are most equally balanced at Hopsport. Spark was the only program studied in which all five outcome measures favor the same gender. Regression analysis, using the at risk subsample of individuals (those who have B% ≥ 85), of the downstream health outcome measure dB% as a function of starting B%, changes in PAs (which are midstream behavioral outcome measures), gender, and program suggests that much of the health outcome benefit delineated in the difference between means analysis is actually due to differences in behavioral outcomes achieved by individuals in the various ASP programs. Once changes in PAs are controlled for, there remains a significant program effect for Hopsport and Catch but not for Spark. Change in push-ups and change in mile run were significant predictors for each of the program subsamples, but change in curl-ups failed to achieve statistical significance in the Hopsport, Spark, and Other subsamples.

Conclusions
The Active Schools Program was successful in altering obesity outcomes in middle school students at ASP schools relative to students at the control schools. Hopsport and Spark exhibited the greatest overall ability to effect positive health benefits; albeit it appears those benefits can be attributed more to midstream behavioral outcomes than to downstream health outcomes.

Support/Funding
The Active Schools Program provided schools with a one-time $15,000 grant (a $5,000 Preventive Health and Health Services Block Grant from the Centers for Disease Control and Prevention distributed by PADoH, together with a two for one matching grant from various partner organizations arranged by PADoH). The Robert Wood Johnson Foundation funded control schools for the analysis.