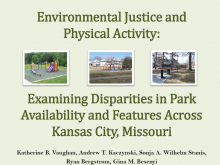 Objectives
The primary purpose of this study was to examine disparities in park availability and features across racially and socioeconomically diverse census tracts (CTs) in Kansas City, Missouri (KCMO).

Methods
All CTs (n=174) with a majority of their area within KCMO were included in the study. Data from the U.S. Census Bureau’s American Community Survey were used to identify the median household income and the percentage of minority (non-White and Hispanic White) residents for each CT. For both income and percent minority, all CTs were categorized into even tertiles (low, medium, high).

Parks were enumerated using GIS shape files provided by the City of KCMO and included in an edited file after an in-person audit if they were deemed useable and publicly accessible. Park availability within CTs was measured using ArcView 9.3 by determining the number of parks in or intersecting each tract.

Park features (facilities and amenities) were assessed using the Community Park Audit Tool (CPAT). The CPAT was recently developed as part of a project funded by Active Living Research and the majority of the items in the tool demonstrated acceptable to excellent Kappas and/or percent agreement (i.e., better than .60 or 70%, respectively). In this study, trained observers used the CPAT to assess the presence of 15 park facilities (e.g., playgrounds, sports fields, trails) and 25 park amenities (e.g., restrooms, lights, car parking). We compared the total number of features, facilities, and amenities per park across CTs, as well as the proportion of parks in the CT containing each individual facility and amenity.

Multivariate ANCOVAs with Sidak post-hoc tests were used to analyze differences in park availability and features across income and race/ethnicity tertiles, controlling for the size of the tract, total population in the tract, percentage of the population under 18 years, and the tract’s income or percent minority (when these variables were not used to stratify the sample of tracts to begin with).

Conclusions
This study adds to an important body of literature examining income and racial disparities in access to active living environments. In KCMO, park availability was greater in low income areas, but some key park characteristics were less common in low income or high minority areas. Low income and diverse areas of KCMO are generally found within the older, urban core of the city where parks are more established. However, similar to past research showing less spending per capita in at-risk neighborhoods (Wolch et al., 2005), greater investments in certain park facilities and amenities may also be necessary. Future research should also consider the quality of park facilities and amenities and the composition of neighborhoods around parks, as well as how disparities in access to park environments are associated with physical activity and health outcomes. Most importantly, public health and parks and recreation researchers and practitioners should work together to examine policies that contribute to and that might rectify disparities in access to safe and attractive parks and open spaces.

Support/Funding
This study was partially supported by funding from Active Living Research.