Partnerships for Parks and Physical Activity

Partnerships for Parks and Physical Activity 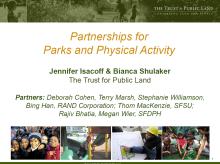 Background and Purpose
The Trust for Public Land (TPL), a national non-profit land conservation organization, works through its Parks for People initiative to design (with public input), plan, fund, and build parks so that urban residents, particularly children, have access to quality parks within walking distance of where they live. For a recent San Francisco Initiative, The Parks for People – Bay Area Program raised over $16 million dollars to renovate Hayes Valley Playground, Balboa Park, and Boeddeker Park—all of which are in diverse, low-income, and park deficient neighborhoods, with high concentrations of children. In this research project, TPL partnered with the RAND Corporation and the San Francisco Department of Public Health (SFDPH) on a study entitled “Park Renovation Impact on Physical Activity among Youth.” This collaboration was instrumental in the design and evaluation stages of park renovations.  Objectives: 1). Assess renovation impact by evaluating the contribution of design components and contextual factors to moderate and vigorous physical activity within parks. 2). Establish a comprehensive method of park evaluation and model for collaborative partnerships. 3). Use findings to recommend next steps in existing parks and inform design in future park renovations.

Description
Six San Francisco parks were observed in 2009 for baseline measurements, and again in 2012 as follow-up. Initial evaluation, existing data, and input from SFDPH helped to inform the renovation designs. RAND developed the research methods that TPL used, and then analyzed the data and summarized findings. The System for Observing Parks and Recreation in Communities (SOPARC) was used to assess park use (number of people, age, and physical activity levels), and approximately 2,000 surveys were conducted to ask park users and local residents about their park use habits and preferences, travel modes, perceptions of safety, and exercise practices.  For comparison purposes, the initiative and three comparison parks were grouped into three categories based upon their construction status in 2012 (fully renovated, partially renovated/under construction, and not renovated).

Lessons Learned
TPL will report case studies, focusing on specific renovation design considerations and their impact on physical activity levels, park perceptions and use. Researchers analyzed physical activity levels for each area of the parks (playground, lawn, etc), and TPL will report on the impact of specific park features. TPL will also discuss how the research collaboration informed the design process, and how evaluation data suggests practical next steps. Some of the results are described below. Overall, the number of park users increased dramatically (up to fivefold) for fully renovated parks and by 40% for partially renovated parks. For parks without renovations, usership remained fairly constant or decreased, which the survey responses suggest is due to restricted hours, current park conditions, and safety concerns. Moreover, in terms of facilitating exercise in parks, local residents and park users in 2009 indicated that built environment changes should made to support more intense levels of physical activity. Reflecting this finding, renovation designs included active play areas, fitness zones (near play areas, which allows simultaneous exercise and child supervision) and walking paths, and improvements of sports fields. During follow up at the renovated parks, 43.5% of survey respondents reported that they primarily exercise in the park, and more said they would if organized programs were available, or if other people exercised with them. In addition, park users and residents listed playground equipment at the top of the list for what they like most in a park, which was followed by comments about proximity, newness, location, and cleanliness. In contrast, 29.1% percent of participants at partially renovated parks and 29.9% at non-renovated parks reported that they exercise in the park. These users exercise primarily on the streets and sidewalks, but over 70% of respondents said they would consider exercise with suggested improvements such as adding amenities, renovating equipment and fields, and improving safety.

Conclusions and Implications
By utilizing direct observation and surveys as part of the park development process, TPL captured a comprehensive view of park use and perceptions, and will be able to utilize the findings to make targeted recommendations for further action to encourage active use of parks (such as adding signage and specific programming), as well as formulate design and layout ideas for designing safe, active, and engaging public parks in the future. These evaluation results will also impact the public participation process, as they can help to shape community expectations for the future.

Next Steps
While the survey responses indicate that some contextual issues, such as safety, had been improved after renovations, it also suggests that signage, programming, and further outreach should be pursued in order to attract an even broader user group and to utilize all areas of the park. In addition, this model of collaboration will allow TPL to implement reliable research methods in future park improvement processes, and to utilize findings in future park projects - in San Francisco, California more broadly, and across the nation.