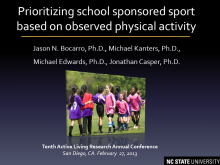 Background and Purpose
Recent global surveillance of physical activity patterns indicates that inactivity among adolescents is a global concern. Community based sport is a promising avenue for increasing physical activity among children. However, many children at higher risk of physical inactivity may not have access to these opportunities due to financial, transportation, or other structural barriers. Public schools within the U.S. have a strong tradition of providing sport programs. The traditional method of school sport delivery favors a competitive interscholastic model. However, recent studies suggest that the adoption of intramural sports, particularly among middle school students, may support greater involvement and activity levels among more students. Since public school resources are becoming increasingly scarce and extracurricular activities are being rationed, it is important that schools prioritize the allocation of resources in ways that maximize benefits to students and the larger community. Thus questions related to how much activity different extracurricular activities generate seem particularly relevant given the pressures and economic constraints school administrators are facing.

Methods
Data were obtained from direct observations in 4 schools with similar demographic populations based on race/ethnicity and income. Two schools had a school athletics policy that was exclusively devoted to competitive interscholastic sports (VS) and the other two had a modified policy devoted exclusively to providing intramural sports (IM). To cover multiple sports seasons, 1,188 observations (661 VS scans; 527 IM scans) were conducted between April, 2009 and September to December 2009 Physical activity levels were recorded in predetermined zones designated for school sports between 2:30-4.30PM by trained assessors using the System for Observing Play and Leisure in Youth (SOPLAY) (McKenzie et al., 2002). Primary SOPLAY codes accounted for student gender and activity level (sedentary, walking, and vigorous), type of play and level of adult supervision (no, limited, or full supervision). Inter-rater reliability for SOPLAY codes was acceptable (kappa > 0.70). Analysis of individual sports was limited to sports that exceeded 50 observations. Descriptive statistics were used to identify mean METs observed in each sport in both sport policy types. Where applicable, t-tests were used to determine whether differences in physical activity levels were observed in the same sport in different policy types. Finally, accounting for the ordinal measurement of physical activity, a generalized linear model using a cumulative logit link function was used to estimate a regression model predicting level of physical activity from sport policy type, gender (with policy x gender interaction), and each of the sport types.

Results
Of the 16 categorized sports, only IM football (mean = 3.48, SD = 1.82), IM track and field (3.38, 1.17), and IM soccer (3.26, 1.67) had observed mean MET values above the moderate physical activity threshold. Overall, IM sports demonstrated higher MET values than IS sports (t = -3.69, p < .001). IM activities ranked in four of the top five sports in terms of average METs. Only IS soccer, IS track and field, and IS basketball were ranked in the top 10. The lowest physical activity levels were observed in IS baseball/softball (2.56, 1.45), IS cheerleading (2.51, 1.37), IS football (2.45, 1.56), and IM kickball (2.37, 1.45). Regression models suggested that an intramural sport policy, regardless of types of sports in the program, had the largest association with increased physical activity (B = .581, p < .001). However, this effect was substantially moderated by gender, with girls being less likely than boys to be more physically active in intramural programs (B = -.574, p < .001). Only soccer and track and field were estimated to have an independent association with increased level of physical activity in comparison to other sport types.

Conclusions
To our knowledge this study was the first to objectively compare middle school students’ physical activity levels generated through participation in extracurricular school sports. The data showed that regardless of sport, intramural sports generated more physical activity among boys but not girls. Second, soccer and track, regardless of school policy type, appear to provide significantly higher levels of activity compared to other sports. Thus, school administrators interested in using resources to increase physical activity among their students should consider intramural sports as an alternative afterschool program.  Furthermore, since intramural sports are likely to attract participation from more students, especially those from low-income and/or minority households (Kanters et al., in press) intramural sports can have greater reach and efficacy than traditional interscholastic sport programs.