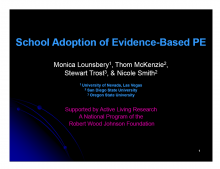 Background:
School physical education (PE) is a critical source of physical activity (PA) for youth, and it is one of only five interventions strongly recommended for increasing PA by the national Task Force on Community Preventive Service (Kahn et al., 2002). Because of competing academic priorities and other reasons, PE has been compromised in many schools and numerous policy gaps and environmental barriers to the quantity and quality of PE exist. Nonetheless, evidence-based PE (EBPE) curricula have been developed, and their adoption has been shown to increase children’s PA levels in PE by as much as 18%. While some research has examined the implementation and institutionalization of EBPE, the dissemination and adoption processes are rarely investigated. Understanding the diffusion of EBPE will go a long way toward improving children’s PA.

Methods:
We obtained questionnaire responses from both principals and teachers from schools that adopted EBPE (i.e., adopters) and compared them with those from geographically- and demographically-matched schools that have not adopted EBPE (i.e., non-adopters). To address Objective 1, we calculated descriptive statistics appropriate for the variable type and distribution. Continuous outcomes were described using measures of central tendency and variability. Dichotomous or polychotomous categorical outcomes were described using relative percentages. To address Objective 2, we evaluated differences between adopter and non-adopter schools Continuous outcomes were compared using t-tests for matched samples and categorical outcomes were compared using chi-square.

Conclusions:
With the exception of adopter schools having a significantly greater percentage of students eligible for free/reduced meals, these preliminary results did not find significant demographic differences between adopter and non-adopter schools relative to the adoption of EBPE. Given discrepant principal and teacher responses about their PE programs, it appears many principals are unfamiliar with the status of PE in their school and curricular/instructional needs. Overall awareness of EBPE was low, indicating that current dissemination efforts are insufficient. Because they report being involved in decision making responsibilities related to adoption of EBPE, both teachers and principals should be considered targets of social marketing and advocacy.

Support:
This research was supported by a grant from the Robert Wood Johnson Foundation’s Active Living Research Program (#65563).