Sensitivity of Objective Measures of Pedestrian Access to the Inclusion of Off-Street Pedestrian Pathways: Methodological and Policy Implications

Sensitivity of Objective Measures of Pedestrian Access to the Inclusion of Off-Street Pedestrian Pathways: Methodological and Policy Implications 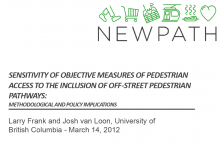 Objectives
The current study addresses two main objectives, drawing on data from the Region of Waterloo, Ontario. First, we quantify how off-street pedestrian path connectivity can improve pedestrian access. Second, we highlight the implications of measuring these paths for walkability research, by comparing how alternate connectivity measures explain walking trips for samples of adults (n=1,447) and youth (n=1,100).

Methods
This study draws on objective data from the NEWPATH (Neighourhood Environment in Waterloo Region: Patterns of Transportation and Health) Project, a transdisciplinary research program with partners from the University of British Columbia, University of Alberta, University of Waterloo, and the Region of Waterloo. A pedestrian network for the Waterloo Region was created from three components using Geographic Information Systems: the local street network, cul-de-sac connectors, and multi-use trails. Two measures were derived to assess pedestrian access: buffer area and intersection density. Sensitivity analyses were performed to assess differences in these measures and their influence on walking behavior, based on the network used to generate the measures: the entire pedestrian network or a network based on specific sub-components, e.g. the local street network.